A while back I was asked to write an article about my comic Liff for Inkspot, the official magazine of the Australian Cartoonists Association. I managed to cobble a few words together and, to be honest, promptly forgot all about it.

Last weekend at Supanova, I bumped into Jules Faber (association president) and Nigel Bell (editor) who informed me that the-article-is-published-now-thank-you-very-much-sorry-it’s-so-late. The issue was placed into my hands, the penny dropped and I lost the bewildered look on my face. As I’ve known these gentlemen for a while (we worked together many many years ago) they politely ignored my ignorance. I hope.

Anyway, some very nice words were said about Liff that weekend by enough people to make me wonder about what to do next with it. I will talk more about that when a decision has been made.

So. Enough of that. Here’s the article: 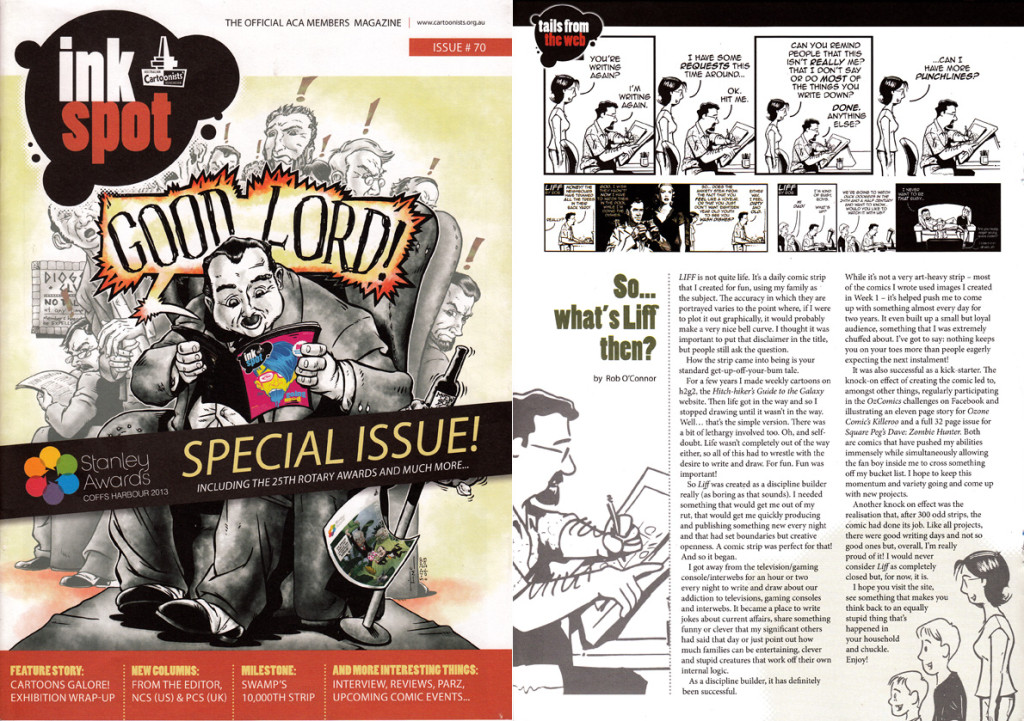 And this is what the article says:

So… what’s Liff then?

Liff is not quite life. It’s a daily comic strip that I created for fun, using my family as the subject. The accuracy in which they are portrayed varies to the point where, if I were to plot it out graphically, it would probably make a very nice bell curve. I thought it was important to put that disclaimer in the title, but people still ask the question.

Why the strip came into being is your standard get-up-off-your-bum tale. 🙂

For a few years I made weekly cartoons on h2g2, the Hitch-hiker’s Guide to the Galaxy website. Then life got in the way and so I stopped drawing until it wasn’t in the way. Well… that’s the simple version anyway. There was a bit of lethargy involved too. Oh, and self-doubt. Life wasn’t completely out of the way either, so all of this had to wrestle with the desire to write and draw. For fun. Fun was important.

So Liff was created as a discipline builder really (as boring as that sounds). I needed something that would get me out of my rut, that would get me quickly producing and publishing something new every night and that had set boundaries but creative openness. A comic strip was perfect for that! And so it began.

I got away from the television/gaming console/interwebs for an hour or two every night to write and draw about our addiction to televisions, gaming consoles and interwebs. It became a place to write jokes about current affairs, share something funny or clever that my significant others had said that day or just point out how much families can be entertaining, clever and stupid creatures that work off their own internal logic.

As a discipline builder, it has definitely been successful. While it’s not a very art-heavy strip – Most of the comics I wrote used images I created in Week 1 – it’s helped push me to come up with something almost every day for two years. It even built up a small but loyal audience, something that I was extremely chuffed about. I’ve got to say: nothing keeps you on your toes more than people eagerly expecting the next instalment!

The knock-on effect of creating the comic has led to, amongst other things, regularly participating in the OzComics challenges on Facebook and illustrating an eleven page story for Ozone Comic’s Killeroo and a full 32 page issue for Square Peg’s Dave: Zombie Hunter. Both are comics that have pushed my abilities immensely while simultaneously allowing the fan boy inside me to cross something off my bucket list. I hope to keep this momentum and variety going and come up with new projects.

Another knock on effect was the realisation that, after 317 published strips, the comic had done its job. Like all projects, there were good writing days and not so good ones but, overall, I’m really proud of it! I would never consider Liff as completely closed but, for now, it is.

Liff can still be found here.